It has been an awful summer and I have not posted for a few months. I have still been busy but blogging has taken a back seat due to the summer holidays (four children at home – I defy anyone to find time, energy or the inclination to post) and yet again being unwell. I have had rotten luck with my health this year. I guess that is all a product of approaching forty? I cannot be certain as I have never been forty before.

What have I been doing

The running has dropped off the radar as I have had to combine my work day with the children with my exercise, meaning that I have mostly been walking and cycling. Project Lake District has taken a back seat, because our last trip out was to Grasmere, and on that day we had a blowout on the motorway with no spare tyre, and since then nigh on every weekend has either seen somebody in the house being sick or, worse than that, rain. As I said in the title of this post: what a crap summer!

I have also added the gym to my routine. I have to be honest straight out of the gate and say that I hate gyms. I mean, I REALLY hate them. I hate the places, I hate the routine and I hate the more annoying people one finds there, but I have resolved to dscipline myself to do it because lifting weights is so beneficial for men of my age that is crazy not to do so. That being said it will still be difficult to cope with the panheads found at any gym, and I have catalogued them below, purely to summarise my annoyance, so forgive my indulgence, but here are the people I hate at the gym, and whom I wish that I could kill with hate lasers fired from my eyes:

This list is not exhaustive. Number five is the worst since I get angry on her behalf, but getting involved is unwise unless it graduates to serious harassment – such interventions are best left to the staff. For my part I take my Kindle along and read between sets. One page between each set makes for the perfect break, and reading for the time between changing exercises is as healthy for the brain as resistance exercise is for the body. I am slowly raising the weights I am lifting each month and I have devised the perfect post-workout vegan smoothie: 250ml unsweetened hemp milk and three tablespoons of peanut butter, pulverised in the blender. Absolutely delicious and very effective. My body is changing remarkably quickly. I have applied the same standard to this as I do to my other exercising, which is essentially flogging myself half to death by working at as high an intensity as I can whilst not endangering my health or safety. Again, it seems to be very effective for me.

With winter coming I hope to step up my running again, and I am going to swim again too. I am not entirely sure why but I prefer these two sports in the winter for some reason. Project Lake District is still something I will definitely do, but obviously not this year. So rather than aim for that I simply intend to complete it in as short a time as possible.

One plan for the medium-long term is to take up sailing and kayaking. I have done both before and I wish to do so again. I previously intended to use a kayak to commute as I used to work near to the Leeds-Liverpool canal, and I live right next to it so it made perfect sense. Unfortunately I left that job before I could realise it and therefore I had no reason to continue that plan, but now that I am approaching forty it seems to be now or never to me. I am currently looking at buying a good quality inflatable canoe or kayak (almost certainly the latter but I remain open to being convinced either way). Concerning sailing, there is a club near me to which I have applied for membership, but that will likely be next year as the weather and winter is drawing in rapidly and they process club administration in their free time so it takes a few months to complete an application. I will start out by taking my son and hiring boats and eventually I hope to buy a boat of my own and have my younger children get involved too; right now they are a little bit young and a wee bit too small for it but they will grow quickly.

I am genuinely excited about taking up this sport, one which I have previously enjoyed and that I will enjoy again. First up is kayaking, and once I master that I should be ready for the next sailing season.

I am currently shedding weight on a ketogenic diet. Low carb, high fat and protein is very difficult as a vegan and it involves eating nuts by the truckload, which is lucky since I love cashews and pistachios, and it is very effective. The remaining weight I am carrying is dropping off me very quickly indeed. I have already gone through two cycles of buying and donating clothes as I shrink, which is, financially speaking, slightly annoying, but luckily there are plenty of charity shops and bric-a-brac shops (thrift stores to you Yanks) near me (I love shopping in them anyway – bargains are my drug of choice!) so I am currently dropping weight quickly and dropping donation bags off at the charity shops equally as quickly!

Seriously though, I have put a lot of time and effort into researching the benefits of nutrition and whilst I cannot ever see me eschewing a vegan diet, I certainly had to think long and hard about how to engage in serious weight cutting that is fast and effective, and the ketogenic plan turns out to be the best by far. I would have implemented it sooner but the brain fog and anarchy of the summer holidays makes life challenging to say the least, which means that I decided to eat as healthily as I can until I re-established the routine of kids at school and I studying and working from home. If you are not a parent then this probably sounds rather contrived, but I can assure you that merely surviving the summer holidays is a ninor miracle. As a teetotaller I have no crutch such as drinking my sorrows away so I had to survive as best I could whilst it rained every other day. I almost forgot my own name…

In summary, the future of this blog and my routine goes like this:

I would love it y’all would join me for the ride!

This year I have decided on an activity for my family entitled Project Lake District. I intend to take my children to all nineteen of the lakes in the Lake District. Strictly speaking only Bassenthwaite Lake is actually a lake. The rest are waters. That being said, geographical taxonomy is neither my specialty nor my subject for this blog. I love the Lake District and have explored a lot of it, climbing Scafell, Helvellyn and Skiddaw Massif to name but a few and I have spent plenty of time around Windermere, Derwent Water, Grasmere, Coniston Water and others. I want my children to experience the beauty of this place too.

Today we conquered Derwent Water. I had initially intended to walk the kids all of the way around it, however this quickly turned out to be unrealistic. A couple of days ago I walked my children 11.52 miles to wear them out and that was, I found out, their limit, so another few miles on top (Derwent is around 14-15 in circumference) would have been impossible, particularly since my youngest had not slept well since the big walk and she is possibly the angriest, most stubborn and grumpy human being I know.  We kept it to four miles (ish) and that left us with some extremely tired sprogs and dogs. 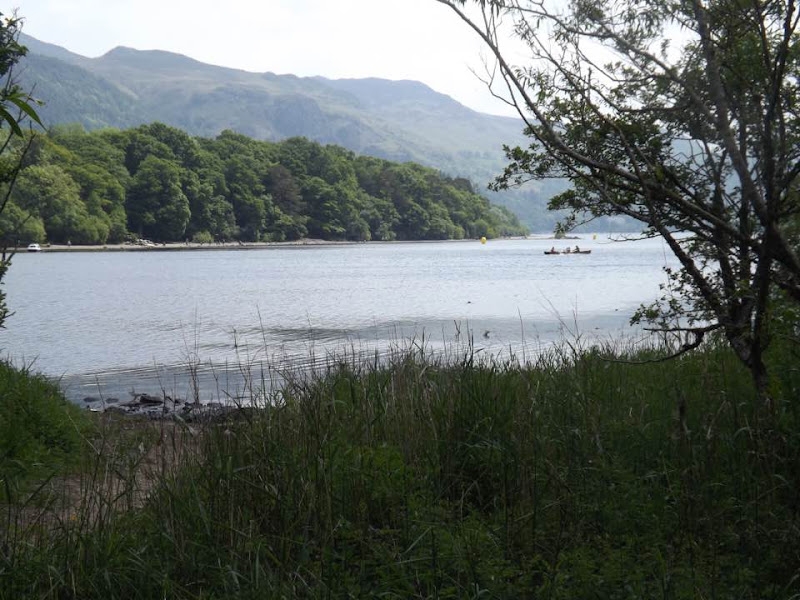 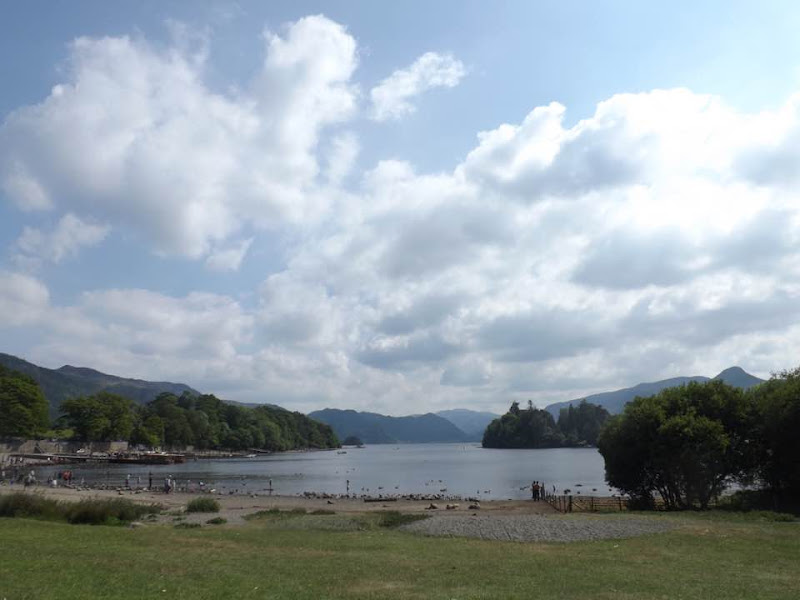 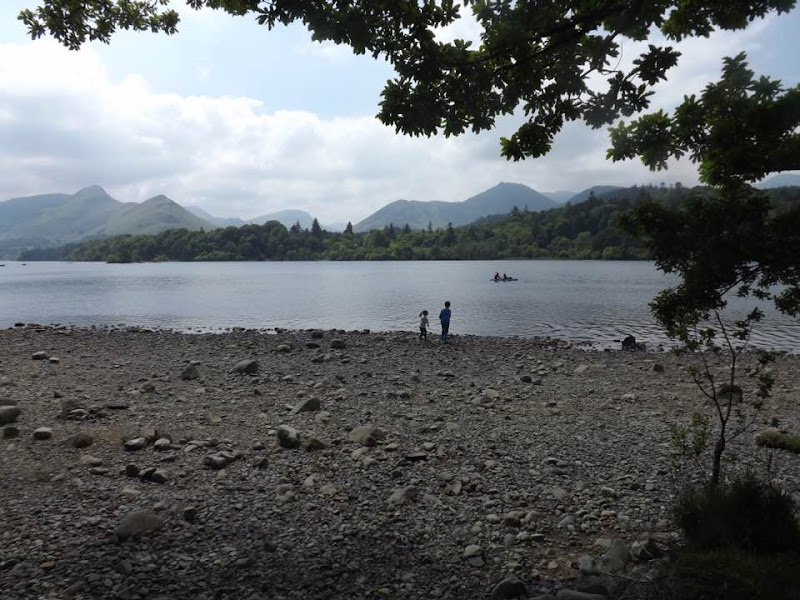